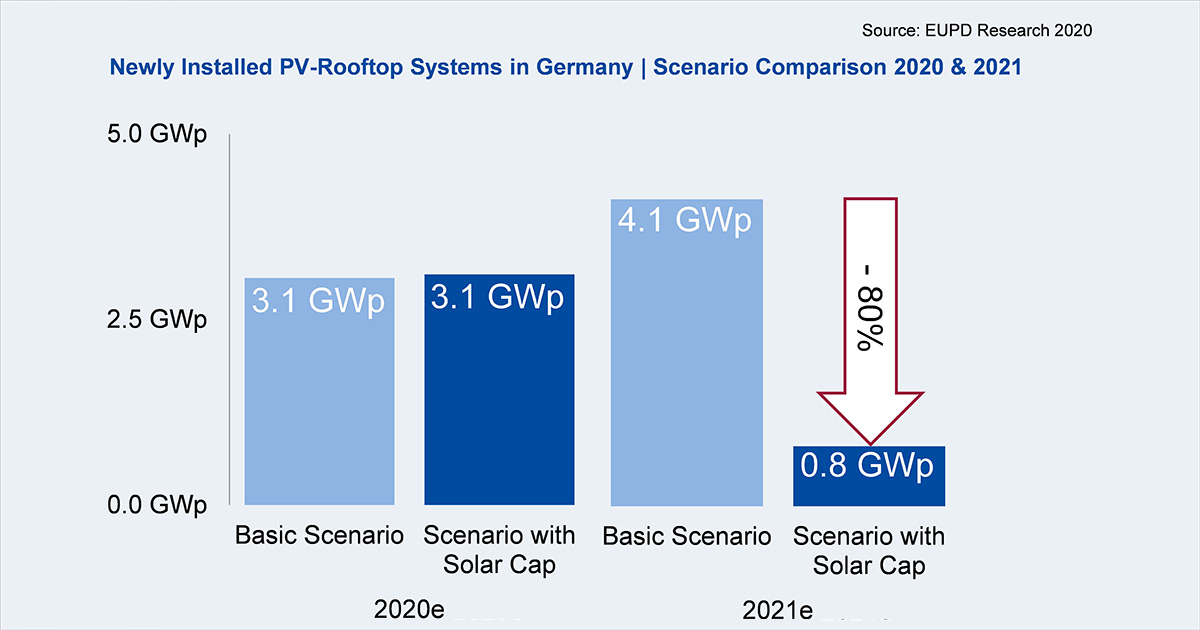 Calculations by EUPD Research show a dramatic market drop for new photovoltaic installations when the 52 gigawatts solar cap is reached. The discontinuation of the feed-in tariff hinders an economic operation of newly installed photovoltaic systems. In 2021 alone, it translates to an investment loss of about 3 billion euros.

Bonn. Despite repeated signals of the Federal Government, the abolishment of the so-called solar cap has not yet been sealed. According to official numbers of the Federal Grid Agency, 50.5 gigawatts of cumulated photovoltaic (PV) installations have been reached at the end of April, leaving only 1.5 gigawatts for feed-in tariff supported PV capacity. Hence, the risk to not receive the promotion for planned investments in PV systems rises significantly for residential end consumers and companies. Installations of small PV installations under 10 kWp – with short implementation times – have strongly increased by one third compared to the same period of the previous year. On the contrary, installations of new, larger PV rooftop systems above 10 kWp, have decreased by one third. This clearly shows the tense atmosphere of the solar industry regarding the solar cap.

The latest analysis of Bonn-based market and economic researcher EUPD Research compares two possible development trajectories for the German solar market. While prognoses for both scenarios in 2020 vary only slightly with 3.1 gigawatts of newly installed PV rooftop systems each, 2021 shows significant differences. For the baseline scenario a clear growth can be determined. In this scenario the newly installed capacity added for PV rooftop systems increases by 35 percent from 2020 to 2021, including catch-up effects caused by the coronavirus crisis. In contrast, the scenario regarding the solar cap shows a massive market drop for rooftop systems affected by the abolishment of feed-in tariffs. In a year-to-year comparison, a 74 percent decrease of new installations is expected. A direct comparison of both scenarios reveals the impact of the solar cap with a difference of 80% for PV rooftop installations.
For the baseline scenario the positive growth trend in the German solar market continues. In response to economic effects of the coronavirus pandemic, a delay of planned PV system installations is expected from residential end consumers and businesses alike. Accordingly, installation numbers in 2020 decrease slightly, while a catch-up effect is expected in 2021.

The impact of the solar cap is reflected in significant anticipatory effects in 2020, which is why the solar cap is expected to be reached by the beginning of August. Then, the state guaranteed feed-in tariff for new PV installations will be eliminated. Subsequently, the annual capacity of new PV installations is expected to plummet and sink to only 0.8 gigawatts in 2021.

Without the feed-in tariff the economic profitability of new photovoltaic installations drops significantly, resulting in a substantially decreased investment confidence – especially for commercial and industrial solar plants. A second effect of the solar cap is a reduced average installed capacity per solar system. Much smaller systems allow for higher levels of self-consumption and economic operation because of electricity procurement savings.

“A continuation of the solar cap is comparable with a declaration of bankruptcy of the German Energy Transition. The delaying tactics of the German government will destroy jobs and the unique know-how of a key industry for a sustainable future”, states Dr. Martin Ammon, Managing Partner of EUPD Research, whilst summarizing the study results.

The presented results are derived from the brief study “Coronavirus and Solar Cap – Fundamental Challenges for Photovoltaics in Germany”, in which EUPD Research analyzes short and medium-term effects for the German photovoltaic sector. The brief study can be downloaded here at no cost. This latest market analysis is supported by leading representatives of the German solar and storage industry: BayWa r.e., E3/DC, Sharp and Solarwatt.

Solar cap as job killer: German photovoltaic sector may experience a loss of every other job